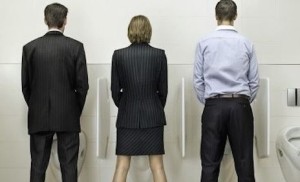 was a time when an employer’s only preoccupation with restrooms was whether the cleaning crew was keeping them stocked with soap, towels, and toilet paper. But now, there is a new reality: federal agencies and LGBT rights groups are contending that transgender employees should be given the right to choose between restrooms having an “M” or a “W” on the door.

On April 1, 2015, In Lusardi v. McHugh the Equal Employment Opportunity Commission (EEOC) issued a decision favoring a transgender worker employed by the federal government. The EEOC’s decisions on discrimination claims are final with respect to employees of the federal government. The EEOC has made clear that its investigators will also rely on Lusardi when presented with transgender claims in the private sector. Whether the federal courts will agree with the EEOC that employees may use restrooms consistent with their gender identity rather than their sex as determined at birth, however, remains to be seen.

In Lusardi, The employee was a civilian employee of the U.S. Army who was transitioning from male to female. Her employer restricted her to a single-user restroom until such time as she anatomically became female. The EEOC found that this policy subjected the employee to “disparate treatment” because of her sex in violation of Title VII of the Civil Rights Act of 1964.

Ultimately, the EEOC held that co-worker “confusion or anxiety” about the transitioning employee’s restroom use did not justify curtailing the transgendered employee’s rights. “Allowing the preferences of co-workers to determine whether sex discrimination is valid reinforces the very stereotypes and prejudices that Title VII is intended to overcome.” The EEOC’s reference to sex stereotyping invoked the Supreme Court’s decision in Price Waterhouse v. Hopkins, which held that treating an employee differently for failing to conform to gender norms constitutes sex discrimination under Title VII. Some LGBT advocates have labeled an employer’s rule restricting transgender employees to single-occupant restrooms as an inadequate alternative.

One question left open by the EEOC’s ruling is whether the co-workers of transitioning or transgender employees have distinct legally cognizable rights with regard to restroom use. If an employer instructs an objecting co-worker to use a single-occupant restroom rather than requiring the transgender employee to do so, for example, may the co-worker complain of disparate treatment because of sex? Courts have not taken a uniform position on whether Title VII protects against discrimination based on sexual orientation or gender identity without the discrimination being tied to a readily demonstrable sex-based characteristic or a theory of gender stereotyping.

Employers holding federal contracts are already facing the prospect of additional requirements. On July 21, 2014, President Obama issued Executive Order 13672, which prohibits federal contractors from discriminating against their employees on the basis of, among other things, sexual orientation and gender identity.  On January 28 of this year, the Office of Federal Contract Compliance Programs (OFCCP) issued a Notice of Proposed Rulemaking in furtherance of the executive order, which states that denying a transgender employee access to the restroom used by the gender with which he or she identifies would be a sex-based discriminatory practice.

All employers should be aware that the Occupational Safety and Health Administration (OSHA), on June 1, announced publication of a guidance on best practices for providing restroom access to transgender workers. According to the guidance, “[t]he core belief underlying these policies is that all employees should be permitted to use the facilities that correspond with their gender identity.” While such guidance does not have the force of a rule, employers who disregard it could possibly be cited for violation of OSHA’s General Duty Clause.

The Employment Non-Discrimination Act, which would extend the same protections to transgender workers in the private sector, has yet to be introduced in the Congress, but has never been introduced in a number of past sessions and was never enacted. This legislative inaction has not deterred federal agencies from attempting to make new law. Given this evolving legal landscape, employers would be wise to start deliberations now on a restroom policy that will best accommodate the interests of all employees and thus avoid having to make reflexive, ad hoc decisions.