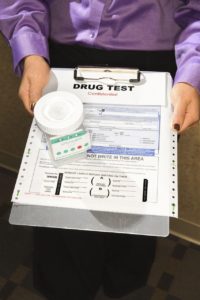 h 31, 2017, President Trump signed a congressional joint resolution of disapproval (H.J. Res. 42) that nullifies a Department of Labor (DOL) final rule. Many commentators believe the DOL Rule imposed a limitation on the states’ ability to require those who apply for unemployment benefits to submit to drug testing.

The 2012 law amended the Social Security Act to add a new subsection permitting states to drug test unemployment compensation applicants as a condition of eligibility and deny jobless benefits for failing the test, under two specific circumstances:

The DOL regulations, which were finalized on August 1, 2016, and effective September 30, 2016, implemented the Middle Class Tax Relief and Job Creation Act of 2012 amendments to the Social Security Act. They permit states to enact legislation that would allow state unemployment compensation agencies to conduct drug testing on UC applicants for whom suitable work (as defined under the state law) is available only in an occupation that regularly conducts drug testing (as determined under regulations issued by the Secretary of Labor). States may deny UC to an applicant who tests positive for drug use under these circumstances.

The joint resolution signed by President Trump nullifies the DOL Rule finalized by the Department of Labor relating to establishing, for state unemployment compensation program purposes, occupations that regularly conduct drug testing. The DOL issued a statement saying “The rule contradicted clear congressional intent—it narrowly limited the circumstances under which drug testing may be carried out and constrained a state’s ability to conduct a drug testing program under the act.”